The paradise paradigms of the ideational section of this website can unite in novels combining optimal ideas, limitless imagination and fiery ideals. As ultimate examples of inspirational fiction, Polytope Press fierily offers the Innovator novels and the most spectacular saga of all time: The Gallion Saga. The new theory of the atom featured only at this website is central to the novels! 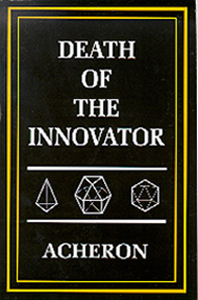 Elaine Morris, an investigative reporter, hotly chases the trail of Kyle Milt, an interdisciplinary genius, a modern day Leonardo da Vinci, who claims to have mastered the structure of the atom. She pursues him not only because the story promises to be the most fascinating of her career, but because privately she feels a deepening lack of faith in life, and she wonders if one who examines life more thoroughly than any who have lived before him thinks life beautiful or ugly.

Unable to find him directly, she follows the track of his research, and as she does so confronts some of the most vital work ever done in the history of civilization: in math, science, art, puzzles, music and more. The more she learns, the more she begins to love life.

Unbeknownst to her, she begins a progression identical to that woven into the tale of Kyle and his true love, Beth.

For Kyle, all of his life and work would be the ultimate expression of love for the woman he became determined to inspire. For Elaine, the work would be the final answer to the question of whether man would ever realize paradise on earth. 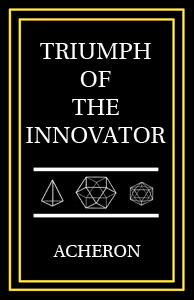 In an alternate reality, the interdisciplinary genius of Death of the Innovator mostly lives the same life as before, but with subtle differences along the way that enable him to succeed in ways he never dreamed possible. Relive the progression of the first novel, but experience a totally different ending!

A lifetime in the making, the ultimate saga of all time is here! Spanning 20 novels, The Gallion Saga tells the tale of an interdisciplinary genius who designs and builds a paradise city against the full force opposition of hell.

Central to the saga is the concept of the truve. A truve is a being of any species exemplifying harmony within and without. Attaining harmony within is accomplished by mastering health like that exemplified in the nonfiction book at this website Natural Healing Self Empowerment, while attaining harmony without is accomplished by mastering the meeting of needs for water, sanitation, food, shelter, power, heating, cooling, lighting, telecommunication and transportation by working in harmony with nature, using resources renewably, cost effectively, and with supreme efficiency, as described in the technology section of this website.

The saga is so powerful, productive and positive only Polytope Press would dare release it, as any mainstream publisher would suppress such constructive energy. The challenges faced by the main character are as extreme as they could be, but one who is attuned to the wonders of nature in minerals, plants and animals wields an invincible force.

Traditionally, literature serves two main functions: to instruct or entertain. A book that tells you all the stats of a shortstop in baseball instructs you, but does not improve your life. Neither does an exciting car chase scene. The saga exemplifies a third option for literature: empowerment. Imagine reading fiction that instantly transforms your life for the better with practical knowledge, while inspiring your imagination by realizing all that could be. The material was not intended to be released so early, but circumstances suggest humanity is struggling to cope and will need all the help it can to survive its current crises. Thus the first three novels are being released now.

This saga is truly transcendent. Nothing like it has ever existed, or ever come close. The world cries out for positive energy, and The Gallion Saga delivers it far beyond any expectations. Your body, mind and soul will inevitably be altered towards their optimal state as you progress in the adventure. The gateway to paradise beckons. You have only to enter…

The Gallion Saga is not intended to be read by anyone under 14 years of age. Though there will always be those mature beyond their years, it is suggested those of you younger than 14 read something else. Go outside. Play in the sun, or the snow. Read empowering nonfiction. Listen to uplifting music. Return here later.

The Gallion Saga portrays a species of being this world generally despises—an idealist. William Alexander once famously stated of paintings that if one wishes to increase the light in an image, make it darker. In literary terms, this means a writer portraying an idealist does so less effectively describing him in a cheery world of few obstacles than in one full of hellish opposition.

And throughout the saga the main character, Gallion, does indeed face hellish opposition. One of the scenes in this novel is taken directly from the text, A History of Torture, by Daniel Mannix. The saga is not for the fainthearted, or for the majority.

Instead it is intended for the boldest, bravest and brightest of souls—the ones most likely to change the world for the better—to act as testing grounds for all their beliefs, and give them the tools most likely to enable them to attain and maintain ideals under the worst of circumstances.

For those who read these words and turn away, go in peace.

For those who choose to remain, a saga unlike any other begins for you, right now…

In the Andromeda Galaxy, on Planet Arkon, a variant species of humanity arises and progresses for millennia amidst poverty, disease and war. All the while, the people remain unaware they are being prevented from reaching their full potential by the Blood Snake, a devil worshipping secret society.

Into this world comes Crayor, a driven, versatile, resourceful dreamer who founds a paradise city based on harmony, efficiency and tolerance. One of those characteristics will prove to be his fatal flaw.

The fate of his dream sets the stage for the advent of one far more powerful, who will grow in ways like no other before him. An interdisciplinary genius possessing mystical powers and the highest life force ever measured, the grandson of Crayor cannot be allowed to live to threaten the Blood Snake.

The devil worshippers will bring him to hell, but in so doing, will only give name to their greatest fear:

After surviving a brutal childhood, village raised Gallion arrives in Krust, the once largest city in the nation of Rikon, and home of criminals, gangs and killers.

To survive street fights, a gang war and a corrupt government, Gallion learns the ways of martial art, but of all the allies he gains, none will prove more powerful to him than nature. Determined to pursue a dream of designing and building a paradise city, he absorbs all the city has to offer before deciding the best way to fulfill his dream.

Gaining the support of a master educator, his diverse skills are magnified to an extreme degree. He will need them all when his mentor draws him into the bloodiest war in all history, between peaceful natives and the deranged terrorists known as the Black Heart. The true origins of the war, like hundreds before it, are not what most believe.

In confronting these origins, Gallion learns the way to prevent all such wars, but at a terrible cost… 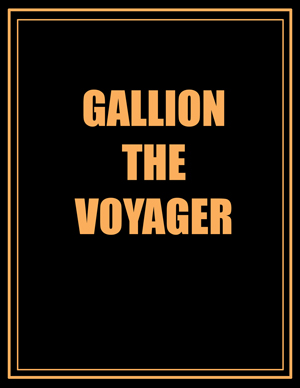 Confronting his world, interdisciplinary phenomenon Gallion sets sail on The Tempest, an intrepid trading frigate commanded by Captain Veran, featuring a diverse company including an evolutionary biologist, controversial anthropologist and rogue archeologist. More than ever Gallion will learn how the devil worshipping secret society, the Blood Snake, controls the world via money, as he becomes tangled in a trade war, slave operation and pirate attack.

Across his planet he will see the ways many cultures live, while developing counters to Blood Snake strategy, learning more of ancient mysteries, the best products, tactics and ideas to improve his world, and a plot for world domination now reaching its conclusion.

Most of all he will discover striking proof of an ancient race of highly advanced beings capable of doing far more than mankind can now do, tantalizing him as never before towards his dream of designing and building a paradise city.